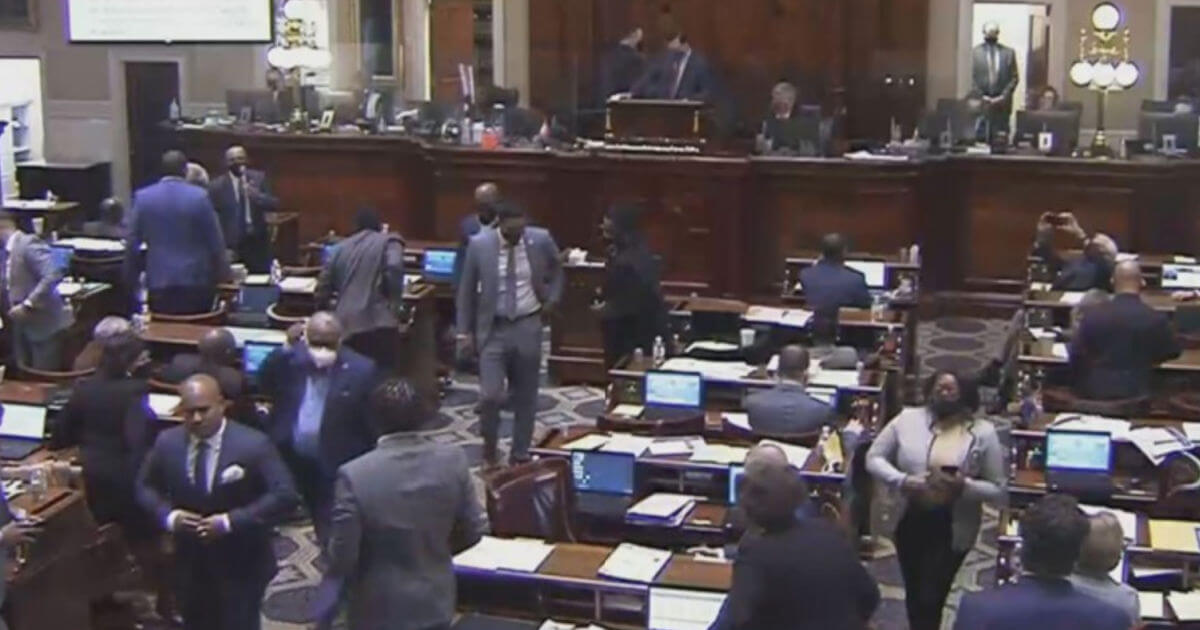 The South Carolina House passed a bill on Wednesday banning most abortions in the state, which led the minority House Democrats to throw a temper tantrum and storm out.

The Associated Press reported the South Carolina Fetal Heartbeat and Protection from Abortion Act passed by a vote of 79 to 35 on Wednesday and was sent to be signed into law by GOP Gov. Henry McMaster on Thursday. The bill is designed to save the lives of unborn children in most instances where an abortion would be easily obtained.

Last month, the Republican-majority state Senate approved the bill by a vote of 30 to 13.

Maayan Schechter, a reporter for the Columbia, South Carolina, newspaper The State, covered the events prior to the House vote.

SC House debates S. 1 (fetal heartbeat abortion ban bill) today. In the Republican-majority chamber, bill is expected to pass today. If it passes without any amendments, the bill doesn’t have to go back to the Senate and can go to the governor. pic.twitter.com/OI7sky92FX

The AP reported the bill would require physicians to use an ultrasound to check for a heartbeat in a child in utero. If the child is alive and well, an abortion can only be performed under special circumstances.

Those circumstances include pregnancies that are the result of rape and/or incest, or if the pregnancy poses a danger to the mother. Illegal abortions performed outside of the parameters of the bill could see abortion doctors face stiff penalties, up to and including two years behind bars and a $10,000 fine.

“This is the greatest pro-life bill this state has ever passed,” GOP state Rep. David Hiott said of the bill.

Being that abortion on-demand and as a form of birth control is one of the few issues that holds Democrats together, those in the South Carolina House were not too pleased to see one of their favorite causes threatened.

What did they do? According to The State, as the bill was being debated, they stormed out of the House chamber in an embarrassing display that was apparently designed to show the world how unified they are in favor of the unrestricted murder of the unborn.

Video of their childish tantrum, shared by Schechter, was posted online.

SC House Democrats have now walked out of the chamber during the debate over S. 1. pic.twitter.com/UY6L4uo7VU

Democrats later came back, and one of them connected pro-life legislators to those who participated in the riot during the Jan. 6 incursion of the U.S. Capitol building.

Schechter quoted Democratic state Rep. Gilda Cob-Hunter as stating: “Maybe I missed some of your pro-life comments on Jan. 6 when five people were killed.”

Apparently Democrats are now united in every state by two issues: unrestricted abortion and engaging in hyperbole when referencing the incursion.

In any event, McMaster signed the bill into law on Thursday, The State reported. Lawsuits seem to be on the horizon, but that didn’t stop South Carolina’s Republican lawmakers from stepping in to defend the most vulnerable in their state.

“Today, we made history. The Heartbeat Bill is now the law of South Carolina and we will defend it with everything in us because there is nothing more important than protecting the sanctity of life!” McMaster tweeted in celebration Thursday.

Today, we made history. The Heartbeat Bill is now the law of South Carolina and we will defend it with everything in us because there is nothing more important than protecting the sanctity of life! pic.twitter.com/n9ldH3CUAJ

So, what does the passage of this heartbeat bill mean? As with other states that have recently passed bills to limit abortion, Republicans in South Carolina are apparently hoping for an eventual reversal of Roe v. Wade.

For now, lawmakers in the state are hoping that eventually, the law will be upheld in the courts.

As GOP state Senate Majority Leader Shane Massey told the AP when the bill passed in the upper chamber, “If this gets upheld by the courts, we will have saved thousands of lives in South Carolina every year. That is a tremendous victory.”