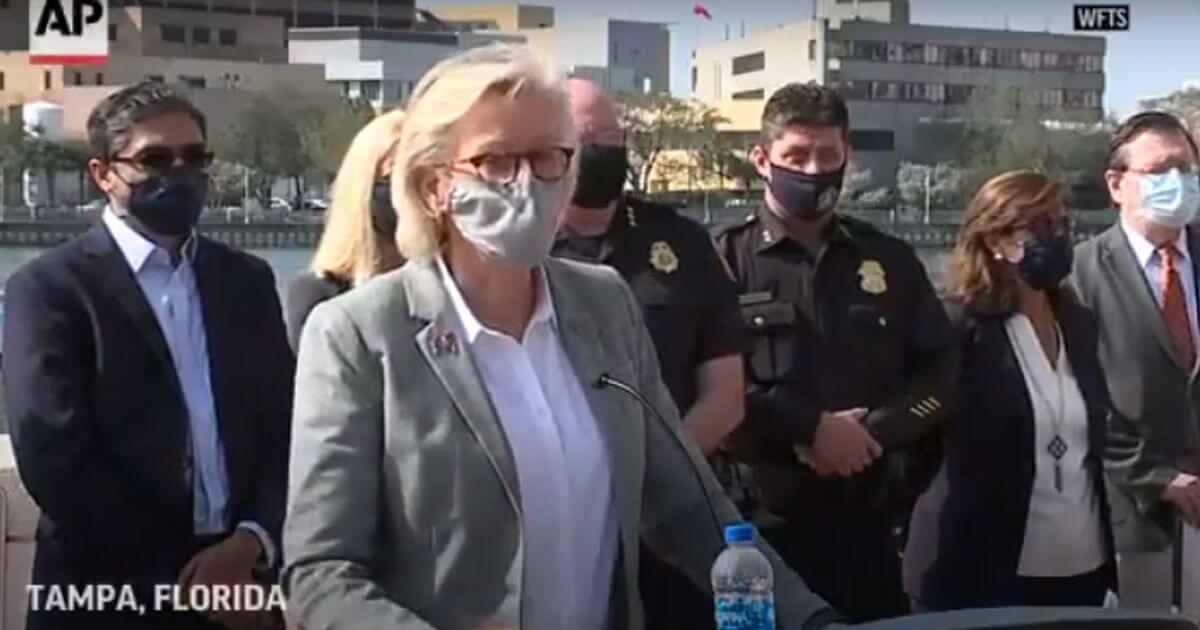 During a press conference on Monday Tampa Mayor Jane Castor said maskless Super Bowl fans will be “identified” by police and that law enforcement will “handle” it.

“Everyone knows that simply wearing a mask dramatically reduces the spread of Covid-19. And I’m proud to say that the majority of individuals that I saw out and about, enjoying the festivities associated with the Super Bowl, were complying,” the Tampa mayor said. (…)

“You know, we had tens of thousands of people all over the city, Downtown, out by the stadium, Ybor City, down here in Channel Side, and very, very few incidents.”

Mayor Castor then got right to the point “So I’m proud of our community, but those few bad actors will be identified and the Tampa Police Department will handle it.” (…)

“There just has to be that level of personal responsibility. You can supply everyone with a mask, advise them of the science behind it, and expect that they are going to abide by the mask order. Again, you’re going to find a few that don’t, the majority that I saw were wearing masks.”

This is horrifying and shows that the emergency powers these folks have been using during the covid crisis will not be easily relinquished as far too many Democrats seem to think they are mini-dictators and enjoy lording it over us peasants.

As you might expect the mayor’s claim that Tampa police will identify and deal with those who dared to go maskless in the city during the Super Bowl did not go over too well.

Of course, first and foremost the mayor, like most other Democrat politicians, is a hypocrite:

Is she going to turn herself in to the @TampaPD for her mask violation? pic.twitter.com/WCeAC9nKWJ

@JaneCastor Maybe you can identify this one. We will be watching to see if you are more lenient to people on the stage with you. pic.twitter.com/eBjk5TTSdI

Others were upset with the seeming hypocrisy of the mayors call for police to deal with maskless super bowl revelers:

So identifying & prosecuting people for not wearing a mask is a priority but identifying Antifa and BLM rioters destroying property and assaulting people was impossible??

Hunt down all those maskless terrorists, drag them from their private properties and workplaces, and ship them off to FEMA reeducation camps, where they will be taught what it means to be a citizen in the land of the free.

All in all it sure looks like the mayor’s call for law enforcement to deal maskless Super Bowl fans backfired almost immediately, which is very good news indeed.

After all this country is still, at least in theory, the land of the free and the home of the brave. At least it is for the moment.