Tampa Mayor Vows to Track Down Maskless Super Bowl Fans, But Here Are Many Photos of Her Maskless 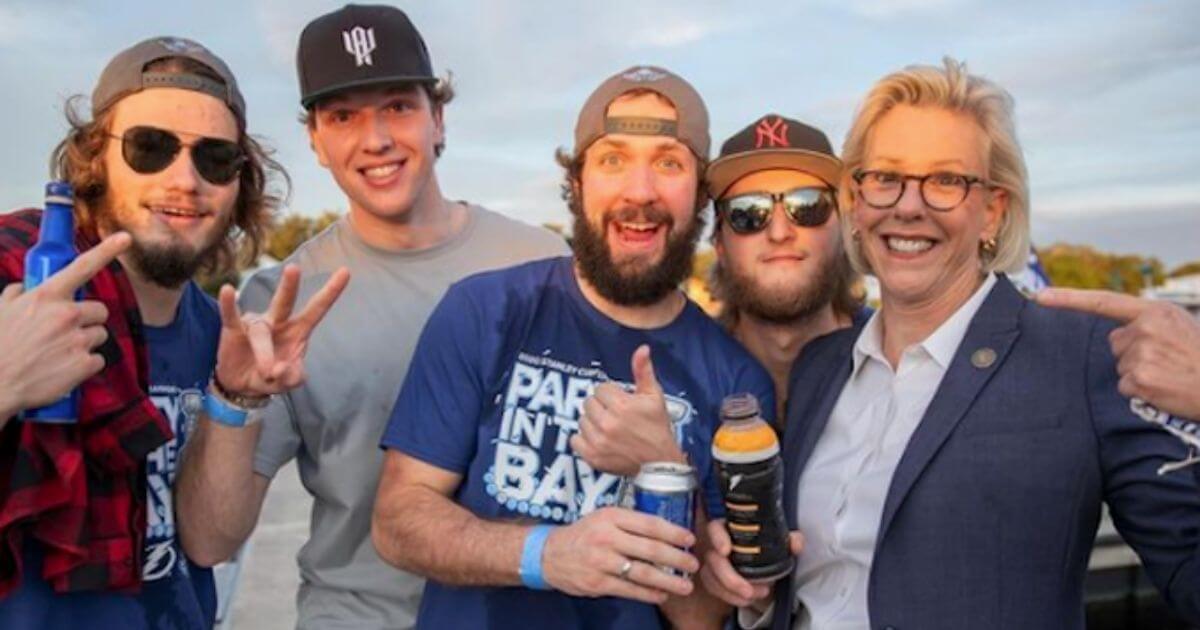 Jane Castor, the Democratic mayor of Tampa, Florida, is being called out for appearing maskless throughout the coronavirus pandemic after she vowed to send the police after people who refrained from wearing face coverings during Super Bowl celebrations on Sunday.

ESPN reported the city of Tampa handed out 200,000 masks prior to Sunday’s championship match between Tampa Bay Buccaneers and the Kansas City Chiefs at Raymond James Stadium. The Bucs won their second Super Bowl — quarterback Tom Brady’s seventh overall — but, sadly, the Bucs’ 31-9 victory wasn’t the only storyline.

Prior to the big game, Castor had issued an executive order mandating that face coverings be worn at outdoor events and gatherings in entertainment districts.

The sight of hoards of football fans celebrating the local team’s championship without masks Sunday sent her into a tizzy.

Never mind that masks are a personal choice, or that we’re almost a year into the pandemic and who knows how many of those people had either contracted and vanquished the virus or had been vaccinated — Castor vowed retribution.

“We had tens of thousands of people all over the city, downtown, out by the stadium … and very, very few incidents. So I’m proud of our community. But those few bad actors will be identified and the Tampa Police Department will handle it,” the mayor said Monday at a media briefing.

Tampa Mayor Jane Castor says “those few bad actors” who celebrated mask-free after the Super Bowl will be “identified.” pic.twitter.com/foqj6mNhDo

“Everyone knows that simply wearing a mask dramatically reduces the spread of COVID-19. And I’m proud to say that the majority of the individuals that I saw out and about enjoying the festivities associated with the Super Bowl were complying,” she added, according to Newsweek.

Castor didn’t go into details with regard to how the city’s police department would “handle” the mask dissenters.

It didn’t take long, though, before some inconvenient photos of the mayor herself began circulating online.

Mayor of Tampa will be prosecuting maskless fans from the Super Bowl. Yet…. pic.twitter.com/rL5LnkyCiY

On the left is Mayor Castor at a Stanley Cup celebration in October not wearing a mask.

On the right is her ordering the police to investigate vaccinated healthcare workers at the Super Bowl. pic.twitter.com/Q76AvYghnY

The Mayor of Tampa wants to investigate & prosecute fans who were celebrating the Bucs Super Bowl win without wearing masks. Based on photos of the mayor also maskless at Tampa sporting events she should start by prosecuting herself: https://t.co/9JZg88iq4J

Castor apparently wasn’t too worried about masking up prior to her city’s time as host of Super Bowl LV.

There’s nothing at all odd about either Castor’s mandate or her propensity for not wearing one. Her city was hosting the largest event in sports, and Castor is a Democrat.

In fact, you’d expect nothing less than a public mask mandate from someone like the mayor.

But it’s hard to reconcile all of those photos and then to read about her anger toward the “bad actors” who disobeyed her order.

We now know the mayor herself apparently isn’t a fan of wearing masks — but some elated Tampa sports fans who feel the same way might be visited by law enforcement.

Democrats tend to make rules that they themselves can’t or won’t follow. At this point, calling Castor a fraud would be almost redundant. Pointing out, yet again, that the Democratic leader of a major city is a sanctimonious hypocrite would be like pointing out that the water in Tampa Bay is wet.