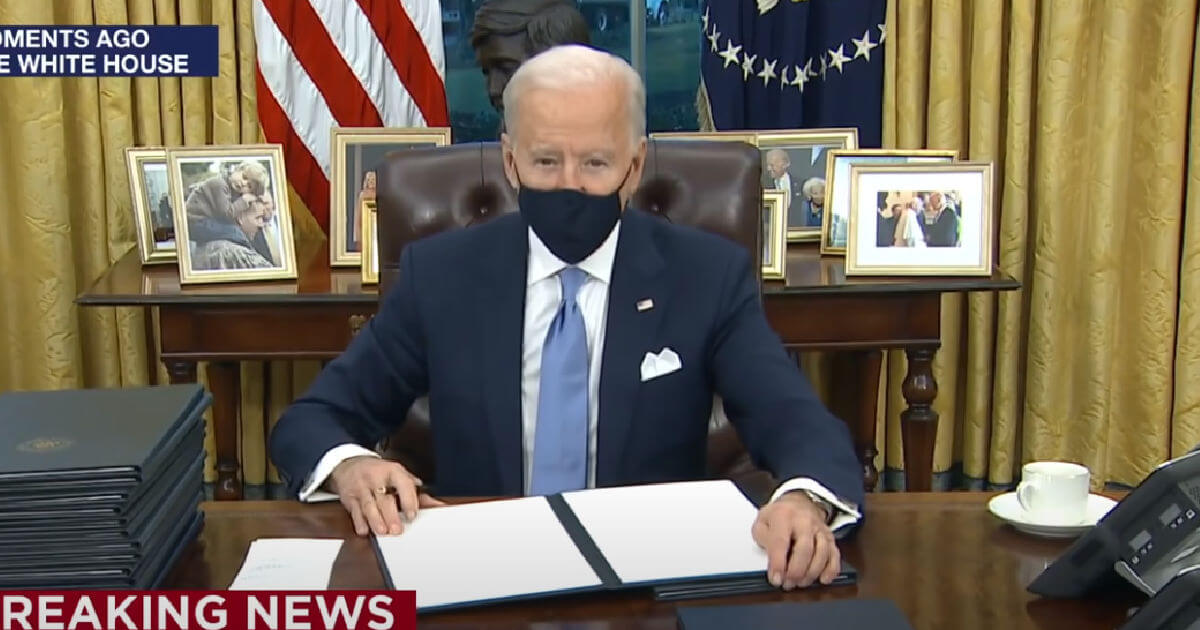 Among Biden’s first executive orders on day one of his administration was canceling the Keystone XL Pipeline, much to the chagrin Canada and the thousands of Americans now out of work by the stroke of a pen. While most Democrats heralded the action as a necessary step in their blind effort to go green, one very powerful Senator is exercising a voice of reason. Senator Joe Manchin (D-WV), Chairman of the Senate Energy and Natural Resources Committee, sent a strong message to Joe Biden this week to reverse the devastating executive order.

Manchin sent in a letter to Biden on Tuesday, outlining the sound reasons for Biden to reinstitute the pipeline.

“I am writing today to express my support of responsible energy infrastructure development, including of oil and natural gas pipelines,” Manchin wrote. “Pipelines continue to be the safest mode to transport our oil and natural gas resources and they support thousands of high-paying, American union jobs. To that end, I encourage you to reconsider your decision to revoke the cross-border permit for the Keystone XL pipeline and take into account the potential impacts of any further action to safety, jobs, and energy security.”

“In the absence of access to pipelines, crude oil will continue to find its way to market through increased reliance on other modes of transport, like truck and rail, which have a higher number of reported releases of crude oil per ton-mile than pipelines,” Manchin added. “Recent analysis by the Department of Transportation shows that incidents occurred approximately once every 50 million gallons of crude oil shipped by rail and once every 55 million gallons shipped by truck, compared to once every 720 million gallons shipped by pipeline. Further, the U.S. Pipeline and Hazardous Materials Safety Administration noted that pipelines have a 99.999% safety record. From a safety perspective, we should be encouraging the transport of energy via our vast network of pipelines and facilitate the responsible expansion of that network.”

Manchin paid tribute to Biden’s “Build Back Better” claims but in the next breath let it be understood that it was “of the utmost importance” that the U.S. maintain “energy security through strategic relationships with our allies rather than increasing reliance on OPEC nations and Russia.”

“This includes the development of infrastructure, like the Keystone XL and Mountain Valley pipelines, to get this energy to market in the safest and most environmentally responsible way,” Manchin said while pointing out that the pipeline had already undergone a “rigorous permitting process that allows experts to weigh-in on the security, safety, and environmental impacts of the project.”

Manchin concluded his letter with a poignant statement that Biden should rise above political approval and do the right thing. “I encourage you to let these processes proceed as intended and to not let politics drive the decisions on the development and operation of our nation’s vital energy infrastructure.”

Manchin was not the only one to send a letter to Biden this week. Attorney Generals from Alabama, Arkansas, Georgia, Indiana, Kansas, Louisiana, Mississippi, Missouri, Montana, North Dakota, South Carolina, South Dakota, Texas, and West Virginia sent a scathing letter of their own.

“As the chief legal officers of our states, we write with alarm regarding your unilateral and rushed decision to revoke the 2019 Presidential Permit for the Keystone XL pipeline,” the 14 attorneys general wrote. “Your decision will result in devastating damage to many of our states and local communities. Even those states outside the path of the Keystone XL pipeline—indeed all Americans—will suffer serious, detrimental consequences.”

Do you think Biden will reinstitute the Keystone XL Pipeline?

The letter points out that Biden’s flip comments of workers finding new and better paying jobs is complete lip-service. “And it’s cold comfort to suggest to now-jobless Americans that by turning the page on projects like Keystone XL, workers can look forward to high-paying green energy jobs that don’t yet exist,” the letter said.

“It’s bad enough for the government to pick winners and losers in the marketplace, but much worse when the winners are aspirational. Aspirations don’t put food on the table, or pay the phone bill, or put kids through college. Jobs do, and you eliminated thousands of them with the stroke of a pen,” the letter continued.

The letter also slammed Biden’s “commitment to unite the Nation”. “If that is to be more than empty rhetoric, you must fully consider and account for the alarming effects your actions have on states, local communities, families, and workers.”

“Please be aware that the states are reviewing available legal options to protect our residents and sovereign interests,” the letter concluded. “In the meantime, we urge you to reconsider your decision to impose crippling economic injuries on states, communities, families, and workers across the country.”