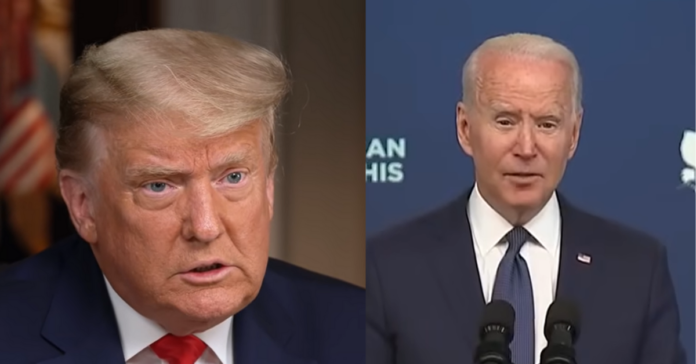 Former President Donald Trump called out President Joe Biden for his terrible job in 2021 listing the “domestic catastrophes’ that happened during year one of Biden’s term. Trump said in a statement:

“In one year, Biden has caused a border crisis, an energy crisis, an inflation crisis, a labor crisis, a supply chain crisis, and a violent crime crisis—all while pushing the most radical left-wing agenda in history.

THE MOST ANTI-WORKER, ANTI-FAMILY, ANTI-AMERICA PRESIDENT EVER: Joe Biden inherited the most secure border in history, the fastest economic recovery on record, historically low gas prices, hard-won American Energy Independence, a domestic manufacturing renaissance, and a nation poised to flourish like never before—all thanks to the America-First agenda of President Trump. It took less than 12 months for Biden and the extremists in his party to turn it all into crisis, chaos, misery, and woe. It’s no wonder Biden is ending his first year with his approval ratings tanking to an all-time record low.

Even the media cannot cover up his dismal record of unrelenting failure:

Inflation is the highest in nearly 40 years—decimating the wages and incomes of hardworking Americans.

Gas prices have risen nearly 50% from one year ago.

America’s southern border is GONE—with 2+ million illegal aliens flooding into the U.S. this year—the most ever recorded by far.

Democrat-run cities across the country are hitting ALL-TIME HIGHS in murders and violent crime.

Mass smash-and-grab robberies and lootings are taking place in cities and suburbs nationwide.

It’s all happening exactly as President Trump predicted. Joe Biden is a DISASTER.

Biden repeatedly promised that he would not raise taxes on anyone making “under $400,000”—a promise he has already tried to break many times.

In reality, Biden’s out-of-control spending binge has triggered skyrocketing inflation that functions as a massive tax on EVERYTHING, at every income level—hitting working- and Middle-Class Americans hardest of all. Every American is poorer because Joe Biden is president.

We have seen huge, double-digit increases in the price of cars, trucks, beef, bacon, eggs, sugar, pork, furniture, housing, and other staples of Middle Class life. But wages and incomes have not gone up to match.

According to a December Gallup poll, 7 in 10 low-income Americans reported hardship due to rising prices.

The Penn Wharton Budget Model estimates that Bidenflation will cost American families 6% of their budget this year, or $3,500—a humongous Biden tax increase on hardworking families.

Joe Biden was WARNED about the inflation nightmare he was creating. In February, top Obama economic advisor Larry Summers warned publicly that Biden’s far-left agenda “will set off inflationary pressures of a kind we have not seen in a generation.”

But Biden did not listen, charging ahead with his socialist programs and saying in July of this year, “Some folks have raised worries that this could be a sign of persistent inflation. But that’s not our view. Our experts believe and the data shows that most of the price increases we’ve seen are—were expected and expected to be temporary.”

Now Biden is preposterously trying to claim that his latest $5 trillion spending bill “will take the pressure off of inflation”—an idea that not a single credible economist anywhere in the world believes.

Instead, Larry Summers continues to warn that “there is significant reason to think inflation may accelerate” even further.

As Democrat Senator Joe Manchin said of Biden’s signature legislative priority: “This is a recipe for an economic crisis.”

In November, Biden claimed that “This recovery is faster, stronger, fairer and wider than almost anyone could have predicted.” FALSE.

The MISERY INDEX (a combination of the inflation and unemployment rates) has reached its highest level in nearly three decades under Biden.

Consumer sentiment is now lower under Biden than at ANY time during the Trump presidency.

Biden’s socialist American Rescue Plan created a disastrous labor shortage by paying millions of people more money NOT to work—long after most Americans were vaccinated and Biden had declared victory over the pandemic.

Under Biden, the Congressional Budget Office has downgraded their long-term projections of economic growth compared to their estimates last year (even after the worst of the pandemic shutdowns).