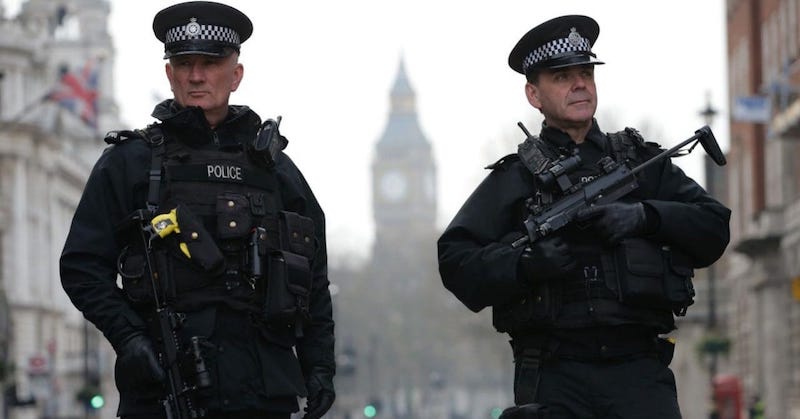 On May 30, 2020, Sergeant Geraint Jones of the Devon and Cornwall police force in southwest England allegedly sent a meme of George Floyd to a few of his colleagues over WhatsApp.

Little did Jones know that this “grossly offensive” meme — which apparently featured an altered image of Floyd, though the meme’s exact contents are unclear — would lead to a criminal charge, The Guardian reported.

“The officer is alleged to have shared the image on 30 May, five days after Floyd’s death in Minneapolis, Minnesota,” The Guardian said.

Sharing certain messages or pieces of content like memes is illegal under Section 127 of the 2003 Communications Act in the United Kingdom. This law essentially subjects members of the public to criminal punishment “for thinking and speaking according to conscience,” National Review explained.

“Section 127 of the 2003 Communications Act makes it an offence to send a message that ‘is grossly offensive or of an indecent, obscene or menacing character,’” The Guardian added.

According to The Guardian, a fellow officer in Jones’s police force reported the image soon after it was sent, and Jones has been suspended from the force since June. On Thursday, he denied the charge in court; his trial is scheduled to start in March.

“Our investigation began in June 2020 following a referral from the force. At its conclusion in October we sent our investigation report to the Crown Prosecution Service, which has authorized the charge,” the Independent Office for Police Conduct said.

The troubling aspect of this situation is the fact that a simple meme could effectively ruin a man’s life.

Was allegedly sharing the meme a good idea? Again, it’s unclear exactly what it said, but the answer is almost certainly no.

Should Jones have been reprimanded at work? Probably.

Should he be treated like a criminal by the UK’s justice system? Absolutely not.

The UK has taken censorship to a whole new level, and this Sharia-style form of censorship that combines censorship with punishment is what one famous author warned about.

In his earth-shattering novel “1984,” George Orwell wrote about censorship and a totalitarian state in which citizens were constantly watched, and even arrested for any behavior that appeared to be anti-government.

Unfortunately, what was once a fictional tale is becoming a reality.

The UK may not employ citizens to rewrite history or be an inherently repressive regime like the state in the book, but Section 127 of the 2003 Communications Act sounds like it would fit right into Orwell’s story.

Things like bullying and hate speech on the internet are horrible and ideally would never happen, but charging people with crimes for sending memes is a form of cruel and unusual punishment.

Sadly, the UK’s Orwellian policy is spreading to other parts of the world.

Steven Guilbeault, minister of Canadian Heritage for America’s northern neighbor, has promised “online hate” legislation that could look similar to the UK’s in the near future.

Keeping you safe online is one of my priorities in this government. Like you, we believe that no Canadian should suffer from online abuse without recourse. That’s why we will be introducing #OnlineHate legislation very soon. ⤵ pic.twitter.com/H8wSHbmkJS

Through these laws, the UK and possibly Canada are using the force of the state to silence opinions that they do not agree with. The UK in particular is even prosecuting citizens for having the wrong ideas.

Negativity and malicious comments toward others are some of the many imperfect aspects of human nature, but giving governments the ability to police and prosecute speech starts them down a slippery slope leading to totalitarianism.

Kamala Harris Accuses Biden of Working with Racists to Segregate Her