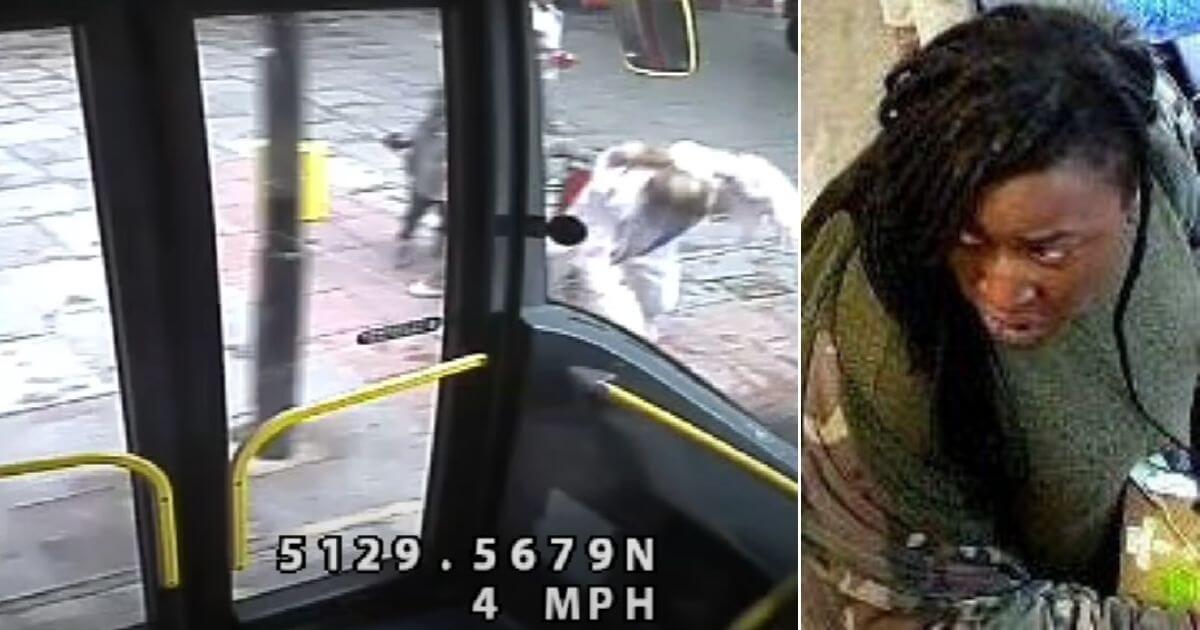 A 40-year-old woman who shoved an elderly retiree in front of a moving bus has been spared jail time because the liberal judge sided with the defense attorney’s claim that the assailant is a good person who had a bad day.

Using this flimflam rationale, you could also excuse murderers, rapists and child molesters for their crimes.

The incident occurred in May 2018, when Amelia Doris — a 40-year-old black woman who has been dubbed the “Pimlico Pusher” — was captured on video pushing Linda Lancaster, who is white and in her 60s, onto a London street just as a bus plowed forward.

The races of the parties are relevant because prosecutors said the defendant uttered a racial slur at the victim before pushing her.

The attack was the continuation of an altercation inside a Tesco supermarket over a perceived slight, according to the Daily Mail.

Doris thought Lancaster’s shopping basket had bumped against her son’s head. According to authorities, that caused her to fly into a rage and start yelling at Lancaster.

Livingston said Doris continued to harass Lancaster inside the store and threatened, “Watch out! Watch what happens to you when you come outside!”

After leaving the Tesco, authorities said, Doris got in Lancaster’s face as the older woman tried to defuse the situation by walking away.

When the victim’s head was turned, Doris deliberately pushed her in front of a moving bus, CCTV video shows.

“She pushed her into the side of an oncoming bus so that she hit her head against the front doors of that bus,” the prosecutor said.

Lancaster suffered cuts to her head and knees and bruises to her shoulders and hands. Moreover, she said she continues to experience post-traumatic stress for which she seeks counseling.

To this day, the victim says she is afraid to go outside for fear of being assaulted again.

“I am reluctant and avoid going out to do basic things such as go to my local store,” Lancaster wrote, according to the Daily Mail.

In a suspended sentence, the judge delays jail time until the defendant completes certain conditions. The judge reserves the right to impose the prison sentence later, or she can cancel it altogether.

How is this not a hate crime? Seriously – no jail time? Talk about hypocrisy.https://t.co/MaYn0AVYcV

In this instance, Cahill ordered Doris to undergo mental health treatment and 20 days of rehabilitation.

The judge’s statements appear to signal that she’ll be lenient toward the assailant after Doris completes “rehab.”

“You are someone of previous good character, which makes this incident completely out of character and really quite inexplicable,” the judge said, according to the Daily Mail.

“The only way it can be explained is either as a result of a loss of temper or a result of mental health. It is difficult to see any other explanation for it.”

Should have been done for attempted murder

This incident is the latest in a growing string of violent attacks where the establishment media and authorities appear to normalize violence against white people by downplaying its seriousness.

A teen Trump supporter got assaulted at Whataburger because he was wearing a MAGA hat.

This is what Maxine Waters called for.

This is what Maxine Waters wanted.

This is Maxine Waters’ fault.

Sadly, the left’s demonization of white people has fueled media nonchalance about this alarming trend.

White people aren’t supposed to complain about racism against them. When they do, they are accused of being “white supremacists” who are indulging their “privilege.”

According to left-wing orthodoxy, a minority cannot be racist; only white people can.

Trump supporter being beaten in the street. pic.twitter.com/lt5fZpYn8h

In October 2020, TheBlaze journalist Elijah Schaffer recounted a terrifying incident where Black Lives Matter rioters beat him because he was filming their crimes.

This work is incredibly dangerous. There’s a reason you don’t see mainstream media journalists on the ground. And of course leftist journalists won’t film. Show support for the videographers in Philadelphia tonight. https://t.co/WgeKTS2Ihj

Schaffer said he believed the attack was racially motivated because the BLM mob in Philadelphia did not assault minority journalists, such as Townhall’s Julio Rosas, who was also on the ground filming the riots.

“I was jumped by BLM rioters while they were looting more than a dozen stores,” Schaffer recounted.

“Other journalists were filming, but I was the only white person in the store. I do believe I was targeted for being white as they accused me of being a white supremacist and did not attack people of color.”

PHILADELPHIA: This is the footage I was recording when BLM assaulted me.

& did not attack people of color pic.twitter.com/Gji7uHq0gB

Schaffer added: “They were specifically targeting and attacking white people tonight in Philadelphia. It was clear, if you were white, you weren’t welcome. That’s why Antifa had their own demonstrations in a separate part of the city.”

They were specifically targeting and attacking white people tonight in Philadelphia

It was clear, if you were white, you weren’t welcome

Follow @realJamesKlug to show some support for his bravery https://t.co/rMEc0AV5ZO

People who think BLM riots are limited only to Democrat-controlled big cities got a rude awakening in October when left-wing mobs ransacked and torched businesses in the Wisconsin suburb of Kenosha.

During the fracas, BLM “protesters” chanted: “Every city, every town, burn the precincts to the ground!”

Police are following this crowd as they march and chant “every city, every town, burn the precincts to the ground.” pic.twitter.com/yCbKzFbpHJ

We are at a very critical juncture. It is time for Americans to take the scales off their eyes and admit the truth of what is happening to our country because of the race-baiting left and their lying media lapdogs.